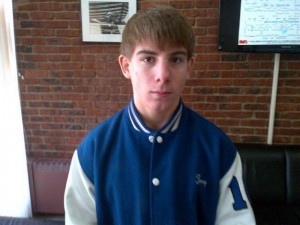 Edgemont wrestler has been perfect

When Edgemont’s John “Trey” Aslanian III steps onto the wrestling mat, his opponents have a “prepare for the worst” attitude.

Through Thursday’s matches, none have succeeded in defeating him this season — and he is looking to keep it that way.

The senior 120-pounder’s success in Section 1 wrestling are hard not to notice.

Add that with his classroom achievements and it is easy to understand why he is Con Edison’s Athlete of the Week.

“I wasn’t good when I first started,” Aslanian said. “But around seventh or eighth grade, I started to get the hang of it and really started to have success.”

Aslanian first got acquainted with wrestling in fifth grade at the Edgemont Youth Wrestling Program. Instantly, he fell in love with it.

His love for wrestling developed into passion and his skills have flourished.

Now, in his final year of high school, Aslanian has set himself up to compete at the highest level of the sport, the state tournament. He will attend Princeton in the fall.

“I remembered when he got his butt kicked in his first tournament ever,” Edgemont coach Pete Jacobson said. “You never know how kids respond to having a demoralizing loss like that. Trey was upset, but not once did he believe that wrestling wasn’t for him.”

Jacobson marvels at Aslanian’s ability to focus and work through adversity.

In a time where people look for instant gratification with every goal, Aslanian learned at a young age the quality of enduring struggle to reach success.

Jacobson said Aslanian was never the strongest, but his commitment to excellence is astonishing.

“His tenacity to keep working harder than anyone else and get better each day is what got him where he is today,” Jacobson said.

Through Thursday, Aslanian had a 25-0 record this season.

On Jan. 5, Aslanian was named the Most Outstanding Wrestler at the Southern Section Small School Scuffle (S5) duals meet.

He finished the competition with two pins, two technical falls and one win by forfeit. The Panthers’ captain didn’t surrender a point at the tournament.

“I don’t like to give up points,” Aslanian said. “I guess you can say I’m a little stingy with them.”

On Dec. 15 at Center Moriches High School, Aslanian became the all-time wins leader for Edgemont and now has more than 160 victories.

Aslanian continues to maintain great marks in the classroom, even with all his wrestling achivements.

Even with a transcript filled with college-level courses, Aslanian has managed a B-plus unweighted average.

“I attribute my good grades to my time-management skills,” Aslanian said. “I don’t waste any of my time that I have. I’m always trying to maximize my time.”

The Con Edison Athlete of the Week recognizes students in Westchester and Putnam schools who excel athletically. Academic achievements, leadership, citizenship, school and community activities are also factors. The winner is selected each week by a panel of athletic directors and coaches who review ballots submitted by each athlete’s athletic director or coach.