HARTSDALE – A Sunday evening trip to the ice cream shop after work was life changing for two men when they ran into a taxi driver outside of a gas station.

Personal trainers John Marsh and Derek Grant say the driver of the cab was in his vehicle when he waved them over. They say he handed his cellphone to Marsh, who saw that he had called 911 and knew he was having some sort of health problem.

By the time the two men hung up the phone, the driver had passed out and Marsh and Grant had to pull him out of the car and lay him down on the concrete sidewalk. Marsh says he performed close to 200 chest compressions on the driver by the time EMS arrived, which may be the reason the man is still alive.

Marsh and Grant haven’t had a chance to meet the victim yet, but say they hope to do so soon. A spokesperson for Central Taxi of Scarsdale says they are thankful for the quick thinking of both men. 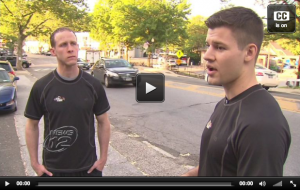