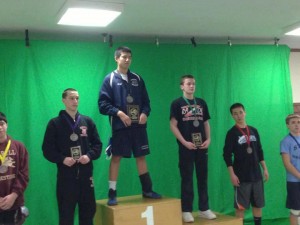 Junior High wrestlers from around the state gathered in the gym to find who’s best – often a great indicator of potential on the high school level.

Edgemont sent three athletes to the event each competing at the 136-pound weight class: Cliffton Wang, Mike Schwartz and Steve You.

The trio had each placed in the USA Wrestling Section Championships last month, earning their spots in the prestigious State Tournament.

At the end of the weekend, Edgemont walked away with a State Champion and another All-State performance. 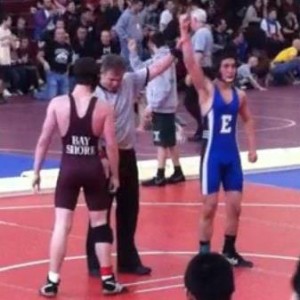 Schwartz after a victory.

Second-year wrestler Mike Schwartz was very impressive as well, coming into the tournament unseeded and wrestling to a 5th place All-State finish. Schwartz won his Round of 32 match with a tight 8-7 decision over Long Island’s Mario Vitagliano. He followed that up with a pin in the Round of 16 before losing to eventual finalist, Edward Munoz, in the quarter-finals. Schwartz rallied back to win two more decisions and eventually captured fifth place with a  10-6 decision over Brian Nicpon.

The future is bright for these athletes and for Edgemont Wrestling as they will no doubt contribute to the program’s success for years to come!