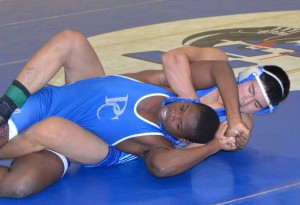 Sophomore Cliffton Wang made his mark in Albany.

Cliffton Wang had something to prove at the New York State Championships last week in Albany’s Times Union Center.

It was the Edgemont sophomore’s second trip to the State Championships after failing to place in the tournament last year at 138 pounds to end his freshman campaign.

This year was different.

After winning his 2nd Section 1 Championship with a decisive pin over Pleasantville’s Tom Marrone two weeks earlier, Wang punched his ticket to Albany and locked his focus on finishing his season strong.

He did just that in Albany. Up two weight classes from last year at 152 pounds, in a bracket heavy with seniors, Cliffton fought through the tournament to finish 7th in New York State. He ensured himself a place in Edgemont history and continued the Panthers’ streak of having at least one wrestlers finish in the Top 7 in New York State every year for the past eight years – a statistic unmatched by any other team at Edgemont and any other wrestling program in Section I.

“Cliffton’s success is 100% the product of his consistent hard work and commitment. It’s really a lifestyle for him – 365 days a year – consistently making choices on and off the mat that get him closer to his goals. I couldn’t be prouder of how he competed. He’s a model of our Panther Tough values,” said Edgemont coach Pete Jacobson.

After mounting a thrilling come-from-behind run in his first bout against Brooklyn International’s Zafar Iskandarov, Cliffton eventually lost the bout in triple overtime. A potentially disheartening way to start his tournament, and putting him in the difficult position of losing in the first round and having to wrestle all the way back into the placement rounds.

Cliff would not be deterred. “He wrestled every match fiercely and aggressively,” Jacobson said. “He was clearly focusing on executing his game plan each match and the work he had put in to shore up his weaknesses was also very apparent.”

The result was clear – Cliffton did not lose a single bout in the tournament by more than two points. He even registered a win by pin over Northen Adirondack’s Collin Labombard – a rare feat at this level of competition.

“Cliffton proved to New York this weekend that he is capable of beating anyone in the State. With two more years remaining in his high school career, the sky is really the limit for what he can accomplish.”

Cliffton however remained focused on the present. When asked about his plan moving forward, he replied: “Take a few days off then get back to training.”