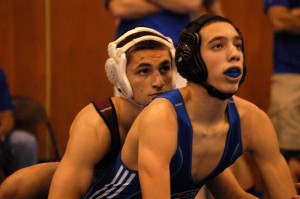 The 2013 Bronx River Cup truly lived up to its history, in an exciting back and forth match at Scarsdale High School Friday night. When the dust settled, Edgemont came away with the victory and brought the Bronx River Cup back to Edgemont.

The match started at 195 pounds where senior Jason Worobow, bumping up from 182, secured a dramatic 1st period pin of Scarsdale’s George Bobolakis.

Scarsdale next picked up 12 quick points, by way of forfeits, at 220 and 285 pounds, respectively.

From there the Panthers rolled the dice, bumping up ten of their remaining 11 wrestlers to the next weight class above where they weighed in. Bumping up to 106 pounds, Kyle Aslanian pinned Michael DeBramo. Next up, Kyle’s brother Tyler, returning from injury, bumped up to 113 where he took out Scarsdale’s Robbie Keltz by 10-3 decision.

Edgemont rattled off two more wins from Max Worobow and Trey Aslanian, also bumping up, before Scarsdale shifted the momentum, winning at 132 and 138 pounds. At 145 pounds, also bumping up, Edgemont junior Will Graybeal rallied back from an early deficit against Scarsdale senior Dylan Madoff to force overtime. Madoff got the takedown and the win in overtime.

This gave Scarsdale a 26-24 lead going into the 152-pound match and Edgemont’s Marc Ficuciello. In a back and forth battle, Ficuciello could not be deterred and came away with an 11-5 decision over Andrew Braun, putting Edgemont in the lead 27-26.

Scarsdale’s Joe Koshakow came away with a pin at 160, giving Scarsdale back its lead at 32-27.

Senior Ross Kantor, also returning from an injury and also bumping up a weight class was up next at 160. Ross made his return felt as he picked up the quick first-period fall over Andrew Elsner. Edgemont now held on to a 33-32 lead with one match to go.

Section finalist, junior Chris Kim bumped up to 182 pounds. Scarsdale decided to forfeit to Chris rather than putting in their wrestler, securing Edgmont’s Bronx River Cup victory with a final score of 39-32.

The Panther’s have one more regular season dual next week, as they look to win their fourth consecutive League Championship when they take on Dobbs Ferry on Wednesday, January 30th at 4:30 PM in Edgemont’s Jim SanMarco Gymnasium.