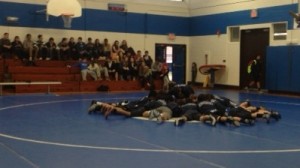 The Panthers get ready to compete.

Wrestling at 138 pounds, Will Graybeal defeated Brian Evan by technical fall 15-0 at 3:46.

And last but not least, wrestling at 182 pounds, Oliver Oks defeated Jason Worobow by technical fall 22-7 in the final match of the afternoon.

With each hard fought match throughout the afternoon at Edgemont, the White Team came out with the victory defeating the Blue Team 22-17 overall. Even after an exhausting match between the Blue and White Team’s the Panthers finished off the evening with a productive practice, which made it an all around great day at Edgemont!

The Edgemont Panther return to action this Friday and Saturday at SUNY Purchase for the Tony Carlucci Duals.