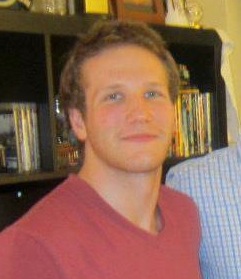 Sean Ross began wrestling for Edgemont in the 7th grade.  A friend of his was joining the junior high team and, although he was not entirely sure of what he was getting himself into, he figured he might as well try it out.  Sean admits he was a little bit “dorky” and lacked confidence at this stage of his life.  But one event would lay the foundation for all of that to change.

“I remember the first match,” recalls Sean.  “I had never really wrestled before and I actually won.  It was the hardest thing I had ever done at that point in my life.  I was so exhausted and worn down.  Physically, I felt awful but I was proud of myself that I had won.  It was a pretty great feeling.”

Unfortunately he only won one more match that season, which was discouraging for the first-timer.  “Afterwards I remember being like, ‘Wow, I never want to do this again.’”

But the memory of his first victory and the pride he felt kept Sean committed to wrestling and, upon entering the 9th grade, Sean, who’s twin brother David also wrestled, began his tenure on the varsity Panther team.

“In 9th grade, I still wasn’t actually sure what I was doing and lacked overall confidence.  But I always remembered how it felt to win that first match.  I always went to practice and paid attention and tried really hard.  I may not have been very good at sports but I kept at it.”

This was also the first year coaching for current Head Coach Pete Jacobson.  He, too, remembers the overall lack of confidence and shyness in the twins.  “In the beginning, sometimes it was even tough to communicate with them.  But they were out there everyday trying to improve.”

“There were a lot of times when I wasn’t sure if I was going to keep doing it or not,” remembers Sean.  “But the coaches were always there and supportive.  They were always trying to do everything possible to make us the best wrestlers we could be.  But ultimately it was up to us to to go out on the mat with confidence and wrestle the match.  Once that sank in I definitely think there was a turning point.  I realized I cant be a shy kid anymore.  I have to step up and be more confidant and go out of my way to improve and not just be satisfied with going through the motions.”

The summer before Senior year, Sean and David took the initiative and attended one of the country’s premiere wrestling camps run by J Robinson, head coach of the University of Minnesota’s wrestling team.  The camp is an intensive, 28-day program.  “The camp is not designed to just make you a better wrestler, it is designed to make you a tougher person,” Coach Jacobson commented. 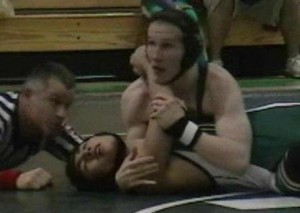 The transformation had begun to take form.  The brothers were named captains that season and Sean just missed placing in the Section.  At the time, a Panther had not placed in the Sections since Anthony DeMaio in 1992.

Gaps in accomplishments and accolades for the Edgemont Panthers are few and far between these days, and Coach Jacobson recognizes Sean and David’s year as “one of the first classes of positive change towards what we have been able to accomplish in recent years.”

High school came to a close and it was time to attend college.  As an underclassman in high school, many doubted that Sean could successfully handle living away from home in a college setting.

“That’s the best message I learned in wrestling.  You can go through life and be average and accept things.  But if you want to be successful you have to push yourself and do things above and beyond what the average person does.  That lesson is really what helped me to get where I am today.”

But Sean was not done yet.  His next goal was veterinary school.  With top programs offering around one hundred spots to thousands of applicants, Sean did not immediately get in to the schools he applied to.  While he built up his resume back home, he decided to return to a familiar arena and give back to a program that had given him so much.

“It was a no-brainer bringing Sean on to our coaching staff,” Coach Jacobson admits.   “Having had the pleasure and the honor of coaching him for four years in high school, I knew first-hand what he got out of the wrestling program here and what he had to offer as a role-model for our student-athletes.”

In a year’s time, Sean was accepted to the University of Minnesota School of Veterinary Medicine where he continues to work on his degree today.  “The work ethic that I received through wrestling gave me what I needed to get here and do well.  As an undergrad you get loads of work, but no matter how much work I ever had, no matter how many all-nighters I had to pull in a row, I knew nothing was going to be as demanding as some of those wrestling practices, or even a single wrestling match.  So I knew I was prepared.”

Sean is a bright example of a young, shy, student athlete that lacked confidence developing into a determined, hard working person both on the mat and in life.  But he is not the only one who goes through this transformation.  In fact, every year during the post-season awards ceremony, one wrestler receives praise for being the Ultimate Teammate.  The recipient is always supportive and always doing whatever he can to help the team.  The recipient exemplifies the qualities of the award’s namesake:  The Sean Ross Award.