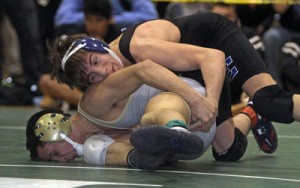 The 120-pounder tore his way through the bracket with a 12-2 major decision in the Round of 16 over Mike Boyle of Cooperstown (Section 3). In the Quarters, Aslanian dispatched Kellen Devlin of Amherst (Section 6) winning a thrilling come-from-behind decision 4-3 by way of a last-second takedown. Finally, in his Semi Final bout, Aslanian opened up a dominant 9-1 major decision over Salem’s Carter Merecki (Section 2).